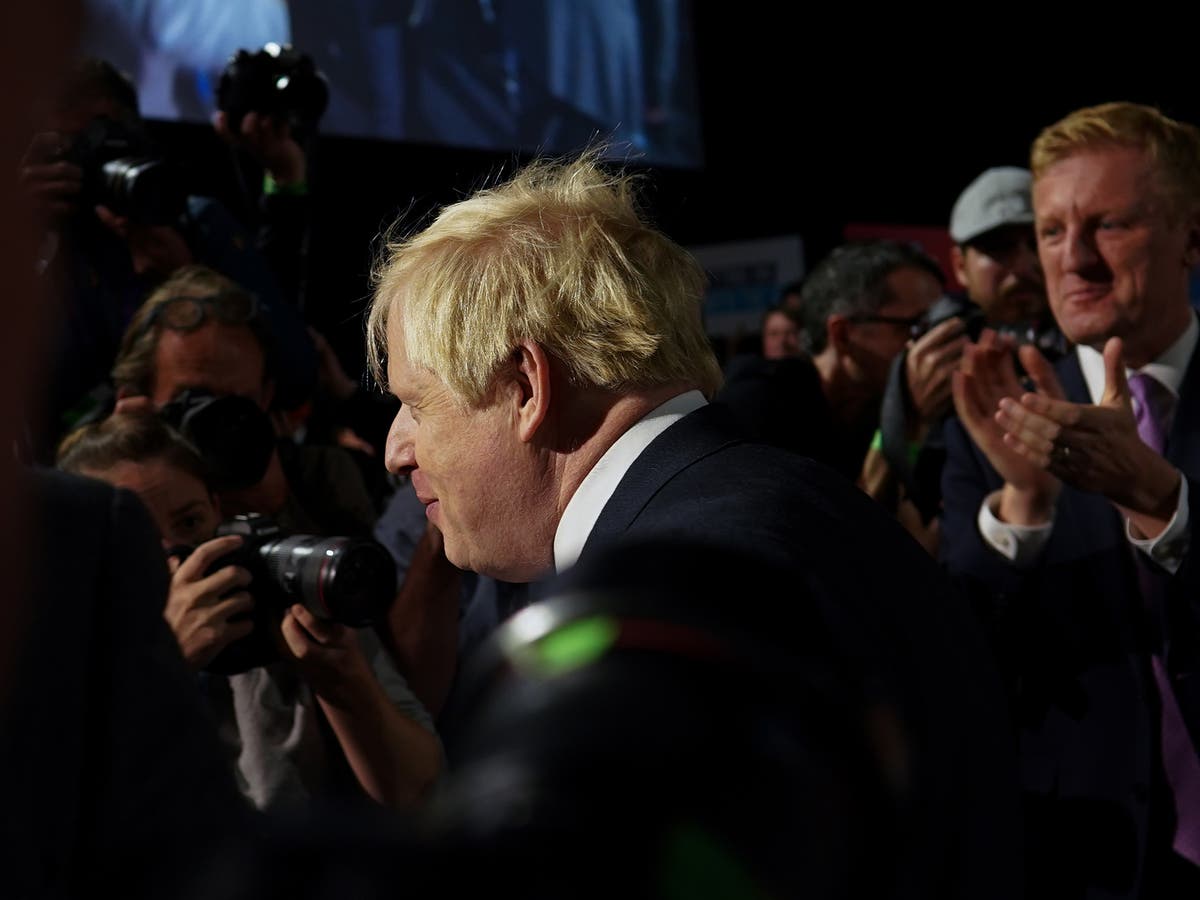 The European Commission is unwilling to renegotiate the Northern Ireland Protocol, its vice-president said.

Boris Johnson’s government continues to blame this section of the Withdrawal Agreement for trade friction between Britain and the Territory.

“We will not renegotiate the protocol as the UK has requested,” Maros Sefcovic said at a virtual event on Thursday.

Elsewhere, the Prime Minister’s conference speech on his vision of a “high-wage economic recovery” has been condemned as “economically illiterate” bragging by a leading think tank.

Amid a severe staff shortage largely blamed on Brexit, Mr Johnson berated companies for reaching the ‘same old leverage of unchecked immigration’ and suggested that UK workers should be given priority instead.

After speaking to Tory delegates at the party’s conference in Manchester on Wednesday, free market institute Adam Smith criticized his remarks as “empty and economically illiterate”.

The organization added that it was “reprehensible” of it to suggest that asylum seekers impoverish the country. “This dog whistle shows that this government doesn’t care about pursuing evidence-based policies,” he said.

Public opinion about the government’s management of the economy, taxes and inflation has plunged over the past month, according to the YouGov poll.

Pollsters also found that Labor and Tories are both tied with 25 percent on which party the public thinks is the best when it comes to taxes.

Nadine Dorries has been accused of being detached from the “real world” after claiming that the reduction in universal credit would push no one into poverty, my colleague Adam forrest reports.

Cutting the incomes of millions of families by 20 per week risks pushing 500,000 people in the UK into poverty, the Joseph Rowntree Foundation (JRF) estimated, while the right-wing Legatum Institute estimated the figure at just over 800,000.

But when asked by reporter Owen Jones at the Conservative conference, how many face poverty because of the cut, Ms Dorries replied, “Nobody. No one is… No, no, no, because no, Owen – of course not.

The deportation of asylum seekers to Afghanistan poses “no real risk of harm”, according to updated guidelines from the Interior Ministry.

The update comes just weeks after Britain helped thousands flee Kabul after it fell to the Taliban.

Activists said it was “evil and immoral” that in order to seek protection Afghan refugees had to show “specific reasons beyond just being a civilian to be affected by indiscriminate violence.”

Mai Bulman has this exclusivity:

A GoFundMe page was set up for a Tory MP who complained that his salary was too low.

He has so far received £ 70 in donations.

The fundraising effort, jokingly put together by Simon Harris, hopes to close that gap.

“Support this Tory MP struggling with £ 80,000 a year,” read the page description.

No “bubbles” back to school, promises the Minister of Education

There will be no return to the “bubble” system in schools, the education minister said.

Nadhim Zahawi said Sky News: “I don’t want to go back to bubbles. Because in fact you’ve seen the drop in attendance that’s really damaging the mental well-being, the mental health of the kids.

His comment comes after about 200,000 children missed school last week due to Covid-19.

It was “insensitive” of a minister to sing (I’ve Had) The Time of My Life as a universal credit cut went into effect, the mayor of London said.

Sadiq Khan spoke after it emerged that Work and Pensions Secretary Therese Coffey had performed the ballad early Wednesday in Manchester.

He said: “We all have the right to have a good time and let go.

“There is nothing wrong with going to karaoke and singing accordingly.

“I think it’s a little insensitive to sing a song – have the best time of your life – on the eve of these cuts.

“I hope it was just an oversight, I hope it’s nothing more. I hope it is not the Secretary of State who is being deliberately callous, and I think I will give him the benefit of the doubt.

“A good social worker” can earn more than a politician, complained a Conservative MP.

Peter Bottomley, the longest-serving male MP, sparked a backlash after suggesting that politicians’ salaries were “hopelessly difficult” for some of his peers.

The House father said he didn’t expect New statesman to execute his comments.

However, he later said LBC he supported them, adding that “a good teacher, a good social worker or a good union leader” would be “considerably worse off” if he became a politician.

Shadow Child Poverty Secretary Wes Streeting said he was “furious” at Mr Bottomley’s initial remarks, especially as they coincided with the government’s universal credit cuts, which it said experts, will push tens of thousands of children into poverty.

“This is my problem with the Conservatives – it’s not that they are evil, mean people who go to work every day thinking, ‘How can we push more children into poverty? but, as Peter Bottomley’s comments show, they just don’t know what life is like for a lot of people in this country and they make policies that actively hurt people who go out, work hard, try to do better to their families and are really struggling.

But food bank users see little chance of this happening.

Zoe Tidman heard the thoughts of a group at a food bank in South West London:

Work “better on corporate taxes” than the government, according to the boss of the CBI

Labor looks “better on corporate taxes” than Tories, the head of the Confederation of British Industry (CBI) said.

Speaking at an event hosted by the CBI on Thursday, Tony Danker said: “The crisis we’re going through is that every piece of business taxation seems to be going up and I don’t think that’s a good plan for growth. “

He also suggested that there was a “series of pressure on wages” as the job market is as “hot as hell”.

The Welsh Conservative leader is taking a long time to recover from the coronavirus, he said.

In a statement, Andrew RT Davies said: “As some of you know, over the past fifteen weeks I have battled a dose of the flu and subsequently coronavirus.

“I’m starting to recover, but admit it hit me for six years and impacted my mental well-being.

“Like many men, I always believed I had an invincibility shield, and like many who have struggled, I thought about whether I should make this public.

“However, as a leader, I think you should set an example and I want to be open and honest – in good times and in bad times – because I know a lot of people have struggled and will do so with their Mental Health.

Paul Davies will assume his duties during his absence.